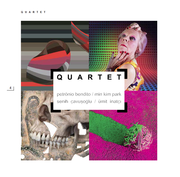 This essay appeared at the QUARTET exhibition catalog (pp. 5-6) and is transcribed below.
EMU Art and Design Center (publisher), 2013.


Haiti Earthquake 2010, Japan Tsunami 2011, Sandy NYC 2012: the titles of Petrônio Bendito’s new Natural Disaster Color series bring to mind horrific images of devastated cities and destroyed lives. Our vivid memories of those tragic events have been shaped by the countless photographs and videos that have been posted on the internet by amateur photographers, witnesses and survivors alike. Reaching a global audience without delay or editing, those images threw us into the thick of those events. No longer voiced only by journalists, the tragedies unfolded on our screens as those who lived through them uploaded images and shared with us in real time their visions of a world unraveling. This myriad of poignant, personal documents has come to play a major role in our collective consciousness and, as a whole, is transforming our relation to the environment, death, disaster, and to the media through which we re-experience them.

Sixty years ago, a similar transformation of our relationship to media occurred when dreadful events began to be reproduced in Technicolor. In response to the multiplication of terrible images in colorful glossy magazines and TV broadcastings, Andy Warhol created the Death and Disaster series (1962-63), in which he commentated on the deadening effect of mass media on society’s perception of violence. Documentary photography soon became the target of intense criticism for its aestheticization and exploitation of suffering (1).  But those discussions did not prepare us to deal with all the snapshots of natural disasters now haunting the internet. This new type of documentation poses new questions, and critical discourses about the ideological and exploitative dimensions of photography seem irrelevant when it is the victims of those natural disasters who are taking the horrific images and posting them online. Here the pictures are no longer the work of professional photographers, displayed along with captions and texts that inform its meaning. Instead they are hurried snapshots of nature’s devastation in a time and age when people experience and document their surroundings through the lenses of their cell phones.

While some of those internet images have entered mainstream media and become iconic, the rest simply roam the web, showing to all those who click on them visions of helpless witnesses of life’s fragility. Petrônio Bendito recovers them(2), and engages in a dialogue with this new imagery of death, doing for online social media what Warhol had done in the 1960s for mass media.

The project started as Bendito helplessly watched from his computer as Hurricane Katrina hit New Orleans, the Indian Ocean burst into a tsunami, and Port-au-Prince collapsed in the shocks of an earthquake. His way of making sense of those photographs of a reality so terribly absurd and ungraspable was to bring them into his own world, and think them in colors. Bendito is indeed first and foremost a color theorist; others would say he is a digital wizard, who uses the dry language of computer sciences to invent colors algorithmically and create new (digital) realities, as seen in his Color Code series (3).  Digital color was thus his entry point in those pictures of disasters. For months, Bendito looked at them in his computer, studying their color variations, searching for a connection and a meaning in all this destruction. In a photograph of the 2007 flood in China, he recognized, within the maroon of the muddy water, the orange of the survivors’ life-jackets. The orange hue was the thin thread that still connected the victims to the natural elements that engulfed them. In a photograph of the 2012 earthquake in Chile, he connected the grey colors of the collapsed bridge to the grey reflection on the sea and sky.

In the process of establishing digital color palettes for his images, Bendito reconnected in color the different pieces of a fragmented world. In the computer he transformed photographs and videos from the Internet into grids with assigned colors to each of the squares. As such, it calls to mind Piet Mondrian’s grid of universal order and unity. But Bendito’s grid is not orthogonal; the lines move and fold gracefully through vectorial paths that he manipulates digitally, building new relations between humans and nature through shapes and colors. His color palettes provide the viewer with an alternative entry point for the events that they depict. While such an abstraction of the original photograph may suggest an attempt to disguise the events they depict by masking them with an abstract grid, Bendito’s abstractions reveals in fact a desire to reconstruct what had been destroyed and find some inexpugnable order beneath the chaos.

This process of abstraction and reconstruction is documented on a website Bendito created as a part of this project. It was indeed essential for him to bring the Natural Disaster Color series back to the internet since it is so deeply rooted in the digital reality of the web. Yet, the final images had to be printed because they ultimately had to exist outside online social media, where the natural disasters actually happened.

Bendito’s prints transcend the horror of the events depicted in the original photographs. Presented in the gallery, they provide a monument to mourn, remember, honor and reflect on what happened in New Orleans, Haiti, Tohoku, and wherever natural disasters strike. Like Michelangelo’s Pieta (1499) or Maya Lin’s Vietnam Veterans Memorial (1982), they offer a poignant memorial of man’s fragile yet inexorable place in the world.

1  See for instance, Susan Sontag, On Photography (New York: Anchor Books, 1990 ); Allan Sekula, “On the Invention of Photographic Meaning,” Artforum 13, no. 5 (January 1975): 36-45; Martha Rosler, “In, around, and Afterthoughts (on documentary photography) (1981),” in Decoys and Disruptions: Selected Writings, 1975--2001 (Cambridge: The MIT Press, 2006), 151-206.
2  Bendito always cross-checks the images he uses with images and information found on governmental website to guarantee that they are genuine snapshots; not fabricated images.
3  The Color Code series was first exhibited in 2012 during the Bloco Vermelho at the Universidade Positivo, Curitiba Brazil. More information is available at: http://www.hesainprint.com/painting-maalaus/8814/color-code-alpha-test 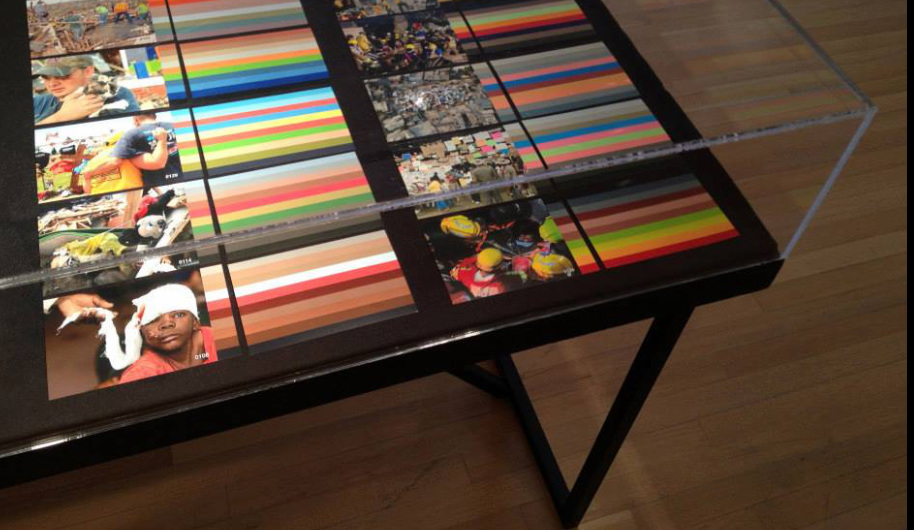 Petronio Bendito. Pain Is My Source Material (2013). Installation View (Size and format variable). This installation features natural disaster photographs that the artist found on the internet. They  are either in public domain, creative commons, or are copyrighted by their respective copyright owners as identified in the gallery space. [photo credits]